The Neolithic vs. the Mesolithic in Southern Poland: Is Everything Known Yet? Nowak et al.

The Neolithic vs. the Mesolithic in Southern Poland: Is Everything Known Yet?

According to a common belief, southern Poland was a typical area of Early Neolithic settlements which was rarely exploited and even ignored by Mesolithic communities. However, the prehistoric reality was more complex. Indeed, the zones largely omitted by the hunter-gatherers were fertile loess uplands and foothills settled by the first Neolithic farmers (Linear Band Pottery culture) in the third quarter of the 6th millennium BC. However, such ecological zones are by no means the only or even predominant zones within the territory in question. Areas with other ecological conditions, mainly those close to the Polish Lowland, yielded surprisingly numerous remains of Mesolithic settlements, including late Mesolithic ones. Radiocarbon data makes it clear that the Late Mesolithic communities coexisted with their Neolithic counterparts. However, the temporal dimension of this coexistence remains a debatable and controversial issue. Nevertheless, it is highly probable that the late hunter-gatherers would use ‘their own’ pottery also in southern Poland. Similarly to many other European regions, the anthropological and historical interpretations that describe and explain the interactions between early farmers and late hunter-gatherers in southern Poland (as well as archaeologically discernible transformations within the latter group) are difficult to construct. It is even more difficult to assess the role played by hunter-gatherers in the neolithisation of this territory. This paper presents and analyses the relevant chronological, chorological, settlement, and typological data. As a result, the hypothesis that the hunter-gatherer communities were but ‘passive’ witnesses to the first neolithisation and functioned independently at least throughout the entire Neolithic period was considered most probable. Certain late Mesolithic populations underwent [Funnel] ‘Beaker’ acculturation, but some continued to function in undisturbed form (including the para-Neolithic form), at least until the end of the 3rd millennium BC.

Arza said…
So after the genetic evidence now we have also the archaeological evidence that hunter-gatherers survived near the Carpathians until the 3rd millennium BCE. The question is whether they are the source of the so called Balto-Slavic drift.
14 November 2021 at 14:55

ambron said…
Papac shows on his map the origin of the Balto-Slavic drift (Baltic BA component) precisely from south-eastern Poland.
14 November 2021 at 20:11

ambron said…
Even colleagues from AG finally realized that the Balto-Slavic drift came from the Carpathian area:

ambron said…
Arza, is that supposedly sensational sample that David once sent you, is that a VERT-114 sample? Is the increased WHG component in this sample related to Balto-Slavic drift?
16 November 2021 at 08:56

Arza said…
I don't know. That sample was a male. But maybe it was a result of a heavy contamination?

Judging by the high position of I1502 (Mako) in the f3 stats the presence of "the drift" is likely.

ambron said…
In general, everything related to drift has recently been revolving around the Carpathian.
16 November 2021 at 16:16

It seems that Russian or Ukrainian archaeologists are missing.
7 December 2021 at 18:11

Popular posts from this blog

Cosmopolitanism at the Roman Danubian Frontier, Slavic Migrations, and the Genomic Formation of Modern Balkan Peoples 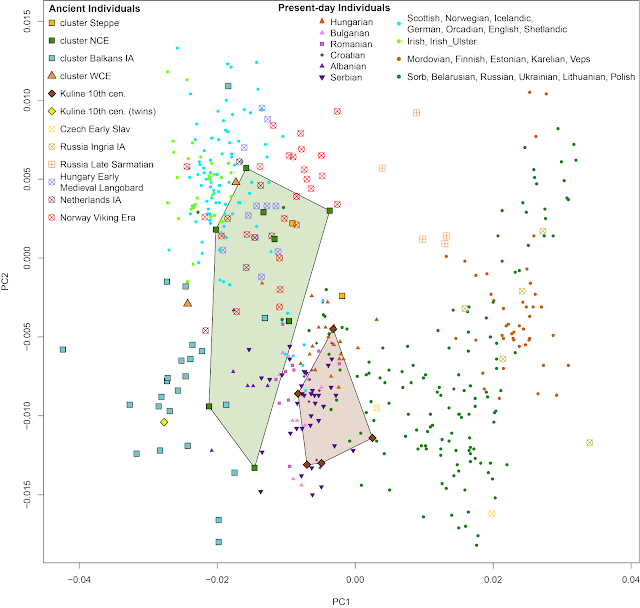